Oi, this website is currently on the move to https://turboflip.de - party on there!
♥️
11
Ich mag das.

Found this older Controller in the basement by my father-in-law. 😉 Don’t know where it comes from…

I don’t found any about this Controller version 2.4. The last notes I found their for the version 2.0

I experimented with some nice functions of this wearable controller. The  nicest feature is the rechargeable on board battery! So you doesn’t need any extra power supply to use the controller. Also interesting are the RGB LED, a Buzzer and a Button their are also on board. 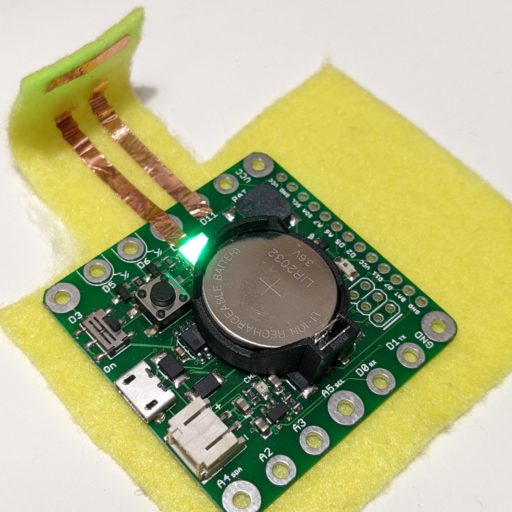 „SquareWear 2.0 is an open-source, Arduino-based wearable microcontroller board. It is small, low-cost, and provides an all-in-one solution for wearable as well as general-purpose electronics projects.

At heart SquareWear is an Arduino running at 3.3V and 12MHz. It has large pin holes suitable for sewing with conductive thread, soldering with wires or sew-on snaps, and they are great for touch sensing too. SquareWear is packed with useful components. It has an on-board mini-USB port for uploading a sketch, charging Lithium battery, and creating serial communication. It&rsquo;s preloaded with an USBasp bootloader. No external programmer is needed. It has a color LED, a general-purpose push-button, a buzzer, a light sensor, a temperature sensor, and N-MOSFETs to drive high-current load. In addition, it has a built-in LIR2032 rechargeable lithium coin battery, so you can power your projects right away without any external power supply. Every time you plug in the mini-USB cable, it charges the coin battery automatically. If needed, you can also plug in an external LiPo battery through the on-board battery jack. It&rsquo;s perfect for building wearable as well as general-purpose microcontroller projects. It&rsquo;s great platform for learning Arduino programming too.

Note: unlike the standard Arduino, SquareWear does not have a USB-to-serial chip. Instead, it simulates USB functionality in software using the V-USB library.“

Buzzer plays tones and the LED turns red if dim the photoresistor. I also read the Capacitive Pin values, by touching or pushing the switch the LED turns from green to blue.

Getting started with SquareWear -> Manual